Read on to learn a little about the history of Molokini and what makes it such a fantastic spot. And when you go, please take us with you!

The birth of Molokini

Molokini is believed to have been created through a series of volcanic eruptions around 230,000 years ago. These eruptions also gave Molokini its distinct yellow soil. When volcanoes erupt underwater, the water turns magma to glass crystals which erode faster than volcanic material on dry land. This is in contrast to the red soil of Haleakala, which comes from magma that cooled on land.

Molokini is a partially-submerged volcanic crater which is considered an islet, or a very small island. Archeological evidence indicates that early Hawaiians visited the islet to fish, and most likely to harvest seabirds eggs and feathers. 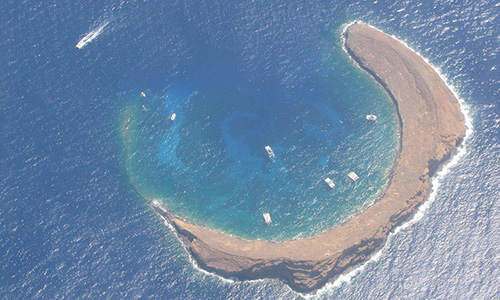 Molokini has had a bit of a rough past. Like the neighboring island of Kaho’olawe, the U.S. Navy used Molokini for target practice during World War II, partly due to the shape slightly resembling a ship or submerged sub. Detonated in-place unexploded munitions were also placed in the crater by the military, which had devastating effects destroying vast amounts of coral. This very rightly angered the public and prompted volunteer divers to conduct thorough and risky manual removals of unexploded munitions. Recent surveys have confirmed that Molokini has been cleared of unexploded munitions.

In 1977, the islet, crater, and 77 acres of water surrounding Molokini were declared a Marine Life Conservation District (MLCD). With this designation, fishing, collecting, or removing specimens, as well as feeding fish, are all prohibited. As we like to say, “Take only pictures, leave only bubbles!” Dropping anchor is also not permitted due to the damage it could cause to the coral, which is why you see our crew jump in with lines to secure the boat to a fixed mooring.

The ecology of Molokini

There are 250 to 260 marine species in Molokini. The most common are yellow tang, Moorish idol, black triggerfish, 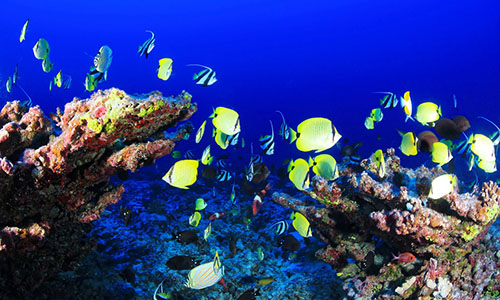 parrotfish, bluefin trevally, raccoon butterflyfish, and red pencil urchins. Because there are so many snorkelers and scuba divers that come through Molokini, the fish are quite comfortable with people. Octopus and eels are usually nearby, although because of their camouflage and tendency to hide out in crevices in the reef, you can’t always see them, Occasionally, and if you’re really lucky, you can see white tip reef sharks, manta rays, and even the indigenous Hawaiian monk seal.

In addition to marine species, there are 38 hard coral species and around 100 species of algae. Rare varieties of plants also call Molokini home—one of these species, the Ihi Molokini, is endemic to only one other place in the world (on nearby Kaho’olawe). Molokini is also a Hawaii State Seabird Sanctuary, and there are two types of nesting seabirds flying high above the cliffs —Bulwer’s petrels and wedge-tailed shearwaters.

Molokini is renowned for its incredible water visibility. It’s typically around 100 feet but can surpass 150 feet on a good day. Because the islet is made of rock, very little sediment washes into the water, and so sunlight is able to penetrate deeper than in most places. Offshore currents help to carry away any sediment and pollutants that do find their way into the water, helping the coral reef stay healthy and allowing snorkelers and divers to see clearly.

With its healthy coral 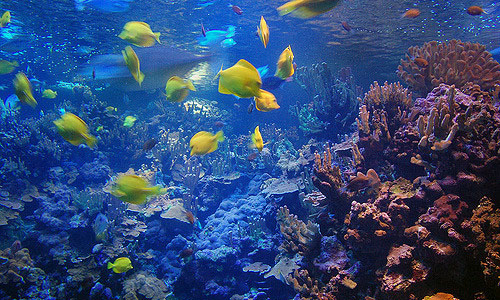 reef, large number of fish and seabirds, excellent visibility, and unique ecology, Molokini is one of the best snorkeling and scuba diving destinations in Hawaii. Don’t miss this spectacular islet on your next trip to Maui!