Drop The Oxybenzone or Stop Swimming In Maui’s Waters

Protecting your skin, and the ocean.

At Sail Maui it’s our business to be in the sun. When you’re on the water every day, it’s important to wear sunscreen. We’re all increasingly aware of the dangers of too much sun exposure and the importance of lathering up, but it’s also our business to take care of the ocean, so we really watch the ingredients. According to NOAA, the National Oceanic and Atmospheric Administration, scientists have found that common ingredients in sunscreens can actually do more harm than good. Most sunscreens on the market use chemicals to filter out or absorb skin damaging UV rays. The issue is that these chemicals have been shown to pose a threat to our fragile reef systems. That is why we provide our guests with reef safe sunscreen as part of our tour package. We know the ecology of the ocean is important and we like to do our part through maui eco-tours or reef safe sunscreen.

Recently a group of experts gathered in Honolulu Hawaii to discuss the present coral bleaching issue. Here is the article in it’s entirety. We hope you enjoy! 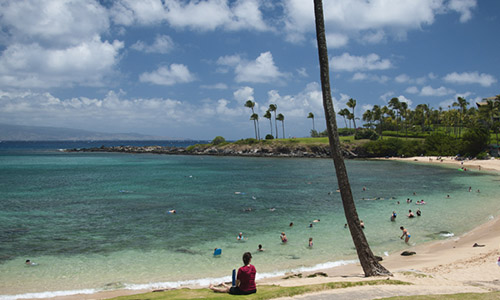 Drop The Oxybenzone or Stop Swimming In Maui’s Waters

Fearing cancer, many beachgoers slather their bodies with sunscreen in hopes of blocking the sun’s sometimes deadly rays.

While the practice may be good for humans, it’s deadly for coral reefs.

As Civil Beat reported in June, scientists say Oxybenzone — an ingredient in many sunscreens and other personal care products — is transforming rich ecosystems into zombies.

Oxybenzone may also have negative effects on human health, causing disruptions to reproductive systems and moderate to high rates of skin allergy.

The good news is that it doesn’t have to be this way.

A panel at the International Union for Conservation of Nature World Conservation Congress Saturday in Honolulu said the solution is pretty simple: stop using oxybenzone and similar chemicals.

Studies suggest that oxybenzone causes deformities in coral larvae, making them “unable to swim, settle out and to form new coral colonies,” according to officials with the state’s Department of Land and Natural Resources, which organized the panel. “This also increases the rate at which bleaching occurs and reduces coral resiliency to climate change.”

It can be quite destructive. The phenomenon was first reported in 2015. 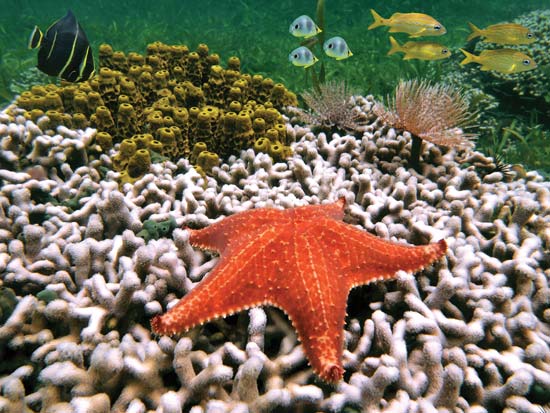 Sunscreen is not the cause of most coral die off.

Robert Richmond, a research professor at University of Hawaii Manoa, said “the most long-lasting extensive coral bleaching in recorded history” has been caused by elevated seawater temperatures tied to climate change.

Still, while climate change will not be fixed easily, he said, the sunscreen issue can be addressed to improve the chances for local level recovery and resilience from massive bleaching tied to climate change.

The problem is not so pronounced in the Great Barrier Reef, where bleaching is caused largely by other factors.

But reefs in Hawaii and the Virgin Islands see more severe impacts from oxybenzone. Researchers have found oxybenzone concentrations in some Hawaiian waters at more than 30 times the level considered safe for corals.

Still, Richmond remains optimistic because saving reefs is a “people issue.” Over half a billion people depend on healthy reefs, which are valued at $1 trillion.

The key, said Jeff Bagshaw, outreach specialist for DLNR’s Division of Forestry and Wildlife, is education and outreach.

Most visitors to Hawaii don’t buy sunscreen until they arrive in the islands. By having retailers (as well as dermatologists) display signs warning of oxybenzone and more than a half-dozen other similarly destructive chemicals, the chances that the poisonous goo will wash off in the ocean could be reduced dramatically.

DLNR has produced business-card size warnings that read, “Before you buy or apply, read the ingredients. Every day, every reef.”

One big problem, said Bagshaw, is that there is no regulatory agency to screen the sunscreens. Some products that brag of being “reef safe” are in fact just the opposite.

Another is reaching tourists.

For those who make the trek to, say, Ahihi-Kinau Natural Area Reserve on Maui, while they may see signs warning of oxybenzone, they are probably not going to hop in their rental cars and drive an hour back to Wailea to buy oxybenzone-free skin care.

Consumers also don’t have to toss all their sunscreen once they read the label and learn they bought the wrong stuff. Alton Miyasaka, aquatics biologist for the DLNR Division of Aquatic Resources, says those products can still be used while doing other outdoor activities, like working in the backyard or hiking.

Ultimately, lawmakers will have to step in.

Espero, a Democrat, wants oxybenzone and its kind banned, a prohibition he hopes can go international.

Watch a DLNR video of the issue below:

A big thanks to Chad Blair for writing a great article that will hopefully bring awareness and help drive needed change.